It’s no secret that the vivo V25 series is heading to India with official launch already set for August 17. Until now we had hear about vanilla vivo V25 and vivo V25 Pro. According to a new leak, a third model – the vivo V25e – could join them. 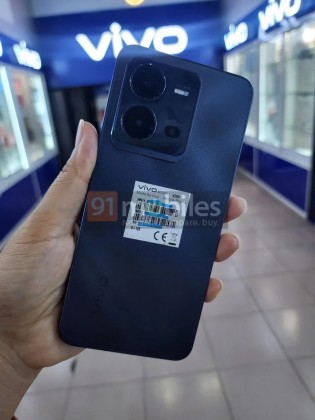 The leak features live photos of very similar looking phones in a pair of colors labeled as the vivo V25 and V25e. This suggests that the V25e will share the vanilla design. It will reportedly be the lowest-end of the range, with a 6.44-inch AMOLED FullHD+ display, a Snapdragon 720G 4G chipset with 8GB of RAM and 128GB of expandable storage, a 4,500mAh battery, a 64MP main camera and 8MP ultrawide and 44MP . However, these are all speculative specifications. The leak also adds that the V25e will be available in orange and black colors and will come alongside the vanilla vivo V25 in global markets.

This is potentially big news as only the Indian market launch has been confirmed so far. Speaking of the vanilla V25, the source claims it will be available in Sunshine Gold and Diamond Black colors, the former of which may feature a color-changing finish. We currently believe that the regular vivo V25 will also have a FullHD + AMOLED display, probably with the same diagonal. Furthermore, the MediaTek Dimensity 900 chipset, 8GB of RAM, a 64MP main camera with OIS and an ultra-wide and depth sensor. In addition, 44W fast charging.

As for the vivo V25 Pro, the company has already teased its design and confirmed a “magical” color-changing back. According to earlier leaks and rumors, the phone will feature a Dimensity 1300 chipset, three rear cameras, the primary of which is a 64MP unit with OIS support and Super Night Mode. There will be a 32MP Eye AF selfie camera on the front, while the display refresh rate is 120Hz. The Vivo V25 Pro will have a 4,830 mAh battery with support for 66W fast charging.

Samsung has released a security update for Android from June 2022 Galaxy S22 Ultra, and the person in charge of the Samsung camera team revealed […]

Apple released a new software update today, but this one is a bit special because it’s for older models that the company no longer supports […]

The Huawei nova 10 series debuts together with the Huawei Tag